Laryngopharyngeal reflux, also known as “silent reflux,” is another possible complication that may develop with chronic heartburn and acid reflux or gastroesophageal reflux disease (GERD). When the sphincter muscle at the end of your esophagus does not work properly, stomach acid can back up into the throat, the larynx or even your nasal passage. The acid causes inflammation in these areas, which are not equipped to protect themselves from gastric acid.

Silent reflux is more common among infants because their sphincter muscles are not fully developed, they have a shorter esophagus and they lie down most of the time. Silent reflux symptoms in adults are not the same as GERD because of the part of the anatomy the acid is affecting. The acid is targeting the larynx, rather than the esophagus, making the diagnosis more difficult because the symptoms present as a cough.

When stomach acid pools in the throat and larynx, it can cause long-term irritation and damage. In adults, silent reflux can scar the throat and voice box. It can also increase risk for cancer in the area, affect the lungs, and may aggravate conditions such as asthma, emphysema or bronchitis. Because silent reflux symptoms affect the larynx rather than the esophagus, as with GERD, it is harder to diagnose and may go untreated. A gastroenterologist can diagnose silent reflux by performing specialized tests. 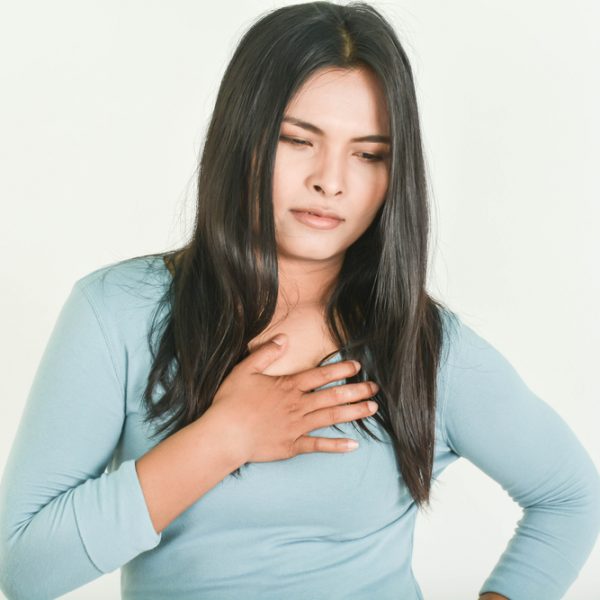 Tests to Diagnose for Silent Reflux

Silent reflux can be managed and treated in similar ways used to manage GERD. Certain lifestyle changes can be made to relieve these symptoms as well as some medications that can be used to control gastric acid.

If these treatments alone aren’t effective in relieving silent reflux symptoms, your doctor may suggest a surgical procedure called a Nissen fundoplication. It’s important to always request an appointment with your gastroenterologist if you are experiencing any of the symptoms of silent reflux.

Have Questions? Set an appointment with Digestive Health Center today.