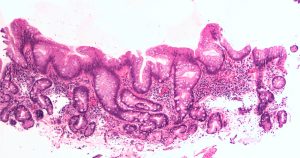 One change that can occur is metaplasia: the process of the reversible substitution of a distinct kind of cell with another mature cell of another kind. This occurs when the body starts growing intestinal cells, rather than esophageal cells, in the esophagus because of the acid influx. If the doctor removes the stimulus that causes the metaplasia, tissues can return to their normal pattern of differentiation. If a metaplasia is not addressed in a timely fashion, it can become dysplasia and/or turn cancerous.

Dysplasia comes from the root Greek term meaning “bad formation.” It is the term used to refer to an irregularity that hinders cell maturation within a particular tissue. Dysplasia is the earliest form of pre-cancerous lesions recognizable in a biopsy, and doctors typically refer to it as low-grade dysplasia or high-grade dysplasia. Low-grade dysplasia means that the cells show small signs of change, while high-grade dysplasia represents a more advanced condition which may progress to esophageal cancer.

These symptoms for Barrett’s are similar to acid reflux symptoms; however, many people with Barrett’s have no signs or symptoms.

Doctors can perform an upper endoscopy to diagnosis Barrett’s and determine what degree of dysplasia has occurred in your cells. During the procedure, the doctor can examine the esophagus and remove tissue samples for testing.

If you undergo treatment, other than surgery to remove your esophagus, there is a chance that Barrett’s esophagus can recur. For this reason, your doctor may recommend continuing to take acid-reducing medications and having periodic endoscopy exams.

Have Questions? Set an appointment with Digestive Health Center today.